Daramalan College was founded in 1962 in the suburb of Dickson in the Australian Capital Territory by the Priests and Brothers of the Missionaries of the Sacred Heart (MSC). Initial enrolments comprised 240 boys in Grades 5 & 6 and Form 1. The name “Daramalan” is derived from an Aboriginal word “daramala”. When the great wedge-tailed eagle appeared in the sky, the people thought of the Great Spirit watching over their lives. For Daramalan, the eagle symbol signifies the Great Spirit of God who enfolds and protects us all. As the school song proclaims, Daramalan students are “eagle people”.

Fr Jim. J. McMahon was Daramalan’s founding Principal. The College expanded rapidly as Canberra’s northern suburbs developed and under the leadership of Fr John McCowage, classroom blocks, laboratories, technology, art and drama facilities were established. McCowage Hall was opened in 1971. In 1977, during the time Fr Jim Littleton was Headmaster, girls were enrolled in the Senior College for the first time. Early innovations at the College included the pioneering of special education by Mrs Jean Reid and Media Studies was introduced by Fr. Arthur Braithwaite.

The annual Daramalan Art Show, as well the successful Music and Drama programs, were also introduced and they continue today.

The 1980s saw further expansion of the College’s facilities with a modern multi-purpose Sports Centre and additions to the Design and Technology Wing being built. Under the leadership of Fr Robert Irwin and later Fr Denis Uhr the facilities and grounds were developed to ensure that the college offered the growing number of students enrolled with a quality learning environment.

In 1996 girls were accepted into Year 7 for the first time and by 1999 the College was fully coeducational. With the introduction of girls into the High School, a decision was made to close the Junior School. In 1998, Daramalan’s first lay Principal Mr Frank Fulton was appointed to lead the College into the new century. He was no stranger to the college having taught at Daramalan from 1964 – 1966. During this time a major building program was undertaken to upgrade the Library by combining the services for both High School and Senior College students in a single, modern Information Services facility. An upgrade of the main administration area and staff facilities was undertaken at the same time. Sadly, Frank Fulton did not live to see his project realised. He died suddenly in October 2002. The project was completed in 2003.

In October 2002, Mr David Garratt was appointed as the new Principal. The College building program continued with the generous assistance of our past and current parents. In 2003, extensive sound and light facilities for Drama productions were added to McCowage Hall and in 2008 a link corridor was added between the Reid and Sharpe Wings, resulting in much improved all-weather access around the school as well as providing a locker area for Year 7 students. Classrooms and outstanding Hospitality facilities were opened in the Garratt Wing in August 2008. A Dance studio was opened in Sharpe Wing in 2009.

In 2009 Daramalan’s first female Principal, Ms Rita Daniels, was appointed. She came to the College with broad experience in all aspects of Catholic education including having spent 21 years at Daramalan previously, in a variety of roles including as Assistant Principal Curriculum.

In 2012 the first stage of the replacement facilities for the current Lysaught Wing was completed and Federal Government funding for a Trade Training Centre for Stage 2 (including facilities for Automotive and Metal Technologies) was approved. This project was completed in time for the 2014 academic year.

In June 2014 the Lysaught Wing (above) was opened by Senator Zed Seselja and later that month it won an MBA Building Award.

In February 2015 the Littleton Wing extension was opened. It  included  a canteen and a flexible learning area which are excellent assets to the college’s extensive facilities.

The Dempsey Science Wing, (pictured left and below) is a replacement of the original Science Wing from the 1960s, and was opened in March 2017.

The upgrading of the Main Quad (the old Year 10 Quad) with landscaping and shade areas is now finished and has been a welcoming and relaxing area for the students.

The Demolition of the Naughton Wing has taken place and construction of a brand new state-of-the-art Performing Arts Centre will start construction in 2022.

The College has come a long way over the last 60 years. Second and third generation students are now an integral part of the Daramalan family and will continue to be for years to come. 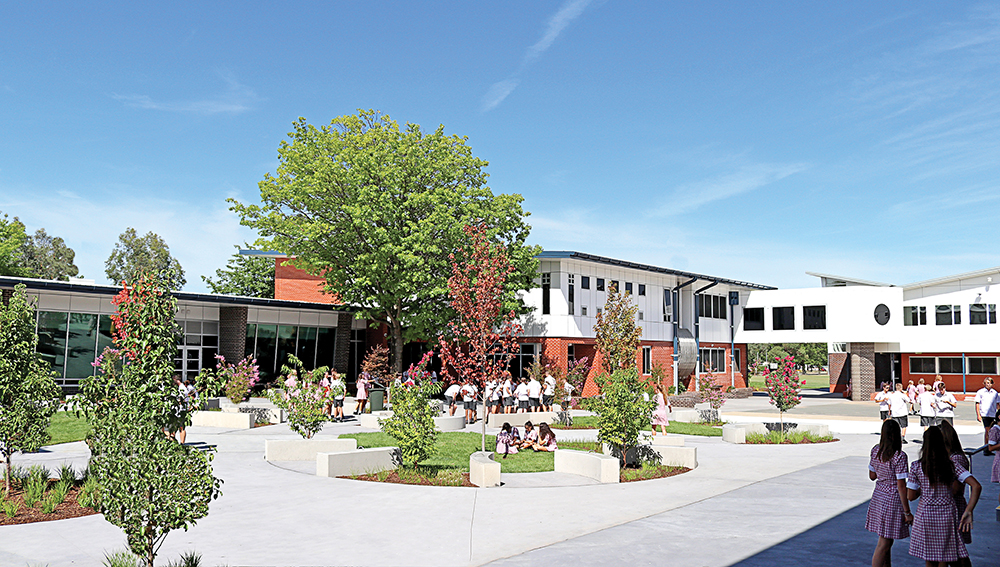